The Pen and the Inkstand 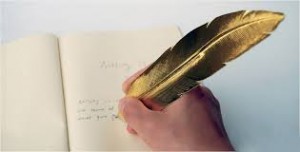 I a poet’s room, where his inkstand stood on the table, the remark was once made, “It is wonderful what can be brought out of an inkstand. What will come next? It is indeed wonderful.”

“Yes, certainly,” said the inkstand to the pen, and to the other articles that stood on the table; “that’s what I always say. It is wonderful and extraordinary what a number of things come out of me. It’s quite incredible, and I really don’t know what is coming next when that man dips his pen into me. One drop out of me is enough for half a page of paper, and what cannot half a page contain? From me, all the works of a poet are produced; all those imaginary characters whom people fancy they have known or met. All the deep feeling, the humor, and the vivid pictures of nature. I myself don’t understand how it is, for I am not acquainted with nature, but it is certainly in me. From me have gone forth to the world those wonderful descriptions of troops of charming maidens, and of brave knights on prancing steeds; of the halt and the blind, and I know not what more, for I assure you I never think of these things.”

“There you are right,” said the pen, “for you don’t think at all; if you did, you would see that you can only provide the means. You give the fluid that I may place upon the paper what dwells in me, and what I wish to bring to light. It is the pen that writes: no man doubts that; and, indeed, most people understand as much about poetry as an old inkstand.”

“You have had very little experience,” replied the inkstand. “You have hardly been in service a week, and are already half worn out. Do you imagine you are a poet? You are only a servant, and before you came I had many like you, some of the goose family, and others of English manufacture. I know a quill pen as well as I know a steel one. I have had both sorts in my service, and I shall have many more when he comes—the man who performs the mechanical part—and writes down what he obtains from me. I should like to know what will be the next thing he gets out of me.”

Late in the evening the poet came home. He had been to a concert, and had been quite enchanted with the admirable performance of a famous violin player whom he had heard there. The performer had produced from his instrument a richness of tone that sometimes sounded like tinkling waterdrops or rolling pearls; sometimes like the birds twittering in chorus, and then rising and swelling in sound like the wind through the fir-trees. The poet felt as if his own heart were weeping, but in tones of melody like the sound of a woman’s voice. It seemed not only the strings, but every part of the instrument from which these sounds were produced. It was a wonderful performance and a difficult piece, and yet the bow seemed to glide across the strings so easily that it was as if any one could do it who tried. Even the violin and the bow appeared to perform independently of their master who guided them; it was as if soul and spirit had been breathed into the instrument, so the audience forgot the performer in the beautiful sounds he produced. Not so the poet; he remembered him, and named him, and wrote down his thoughts on the subject. “How foolish it would be for the violin and the bow to boast of their performance, and yet we men often commit that folly. The poet, the artist, the man of science in his laboratory, the general,—we all do it; and yet we are only the instruments which the Almighty uses; to Him alone the honor is due. We have nothing of ourselves of which we should be proud.” Yes, this is what the poet wrote down. He wrote it in the form of a parable, and called it “The Master and the Instruments.”

“That is what you have got, madam,” said the pen to the inkstand, when the two were alone again. “Did you hear him read aloud what I had written down?”

“Yes, what I gave you to write,” retorted the inkstand. “That was a cut at you because of your conceit. To think that you could not understand that you were being quizzed. I gave you a cut from within me. Surely I must know my own satire.”

“Writing-stick!” retorted the inkstand. And each of them felt satisfied that he had given a good answer. It is pleasing to be convinced that you have settled a matter by your reply; it is something to make you sleep well, and they both slept well upon it. But the poet did not sleep. Thoughts rose up within him like the tones of the violin, falling like pearls, or rushing like the strong wind through the forest. He understood his own heart in these thoughts; they were as a ray from the mind of the Great Master of all minds.

This website uses cookies to improve your experience while you navigate through the website. Out of these, the cookies that are categorized as necessary are stored on your browser as they are essential for the working of basic functionalities of the website. We also use third-party cookies that help us analyze and understand how you use this website. These cookies will be stored in your browser only with your consent. You also have the option to opt-out of these cookies. But opting out of some of these cookies may affect your browsing experience.
Necessary Sempre abilitato

Any cookies that may not be particularly necessary for the website to function and is used specifically to collect user personal data via analytics, ads, other embedded contents are termed as non-necessary cookies. It is mandatory to procure user consent prior to running these cookies on your website.