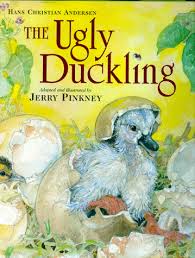 A little duckling was very sad because he thought he was the ugliest amongst all his brothers and sisters. They would not play with him and teased the poor ugly duckling. One day, he saw his reflection in the water and cried, “Nobody likes me. I am so ugly.” He decided to leave home and went far away into the woods.

Deep in the forest, he saw a cottage in which there lived an old woman, her hen, and her cat. The duckling stayed with them for some time but he was unhappy there and soon left. When winter set in the poor duckling almost froze to death. A peasant took him home to his wife and children. The poor duckling was terrified of the children and escaped. The ugly duckling spent the winter in a marshy pond.

Finally, spring arrived. One day, the duckling saw a beautiful swan swimming in the pond and fell in love with her. But then he remembered how everyone made fun of him and he bent his head down in shame. When he saw his own reflection in the water he was astonished. He was not an ugly duckling anymore, but a handsome young swan! Now, he knew why he had looked so different from his brothers and sisters. “They were ducklings but I was a baby swan!” he said to himself.

He married the beautiful swan and lived happily ever after.

This website uses cookies to improve your experience while you navigate through the website. Out of these, the cookies that are categorized as necessary are stored on your browser as they are essential for the working of basic functionalities of the website. We also use third-party cookies that help us analyze and understand how you use this website. These cookies will be stored in your browser only with your consent. You also have the option to opt-out of these cookies. But opting out of some of these cookies may affect your browsing experience.
Necessary Sempre abilitato

Any cookies that may not be particularly necessary for the website to function and is used specifically to collect user personal data via analytics, ads, other embedded contents are termed as non-necessary cookies. It is mandatory to procure user consent prior to running these cookies on your website.